They didn’t appear to see the edge of the cliff but continued on falling happily into the sea.

I have been following a 21-day course in meditation run by Deepak Chopra and Oprah Winfrey. This is my third or fourth time signing up for their free 21-day meditation course. Each time there is a different focus but the programme is basically the same process, learning to meditate, step by step, to achieve a basic practice of meditation. This is the first time that I have succeeded in keeping up with the weekly assignment and have just two days to go. This time I feel quite exhilarated because it seems that I have made some progress. It’s hard to measure that progress but, for instance, I no longer fall asleep in the middle of the session! I no longer have a utilitarian approach to it, but I see it as a process that is being realised in me rather than an end product I take away with  me. I can see more clearly now how I should approach it. It is not a product to be purchasedi and used, but more a process that helps me to follow a path that unfolds as I move. My greatest hurdle up to now has been looking for an end goal rather than following an unfolding path.

“The Way that can be taught is not the Eternal Way.

“The Name that can be named is not the Eternal Name”.

So, what then is the “Way”? What name should I give it? In a strange way, this is one of the threads in my life where, as I explore it, I find increasingly that there is a connection with earlier experiences in my life but with which I have had difficulties in integrating them in a coherent way into Me as I am now. But I now recognise it as a universal theme. Joseph Campbell described it as “The Hero’s Journey”, the Hero being Everyman or as we now stutter and stammer with breathing and grammatical difficulties, Every(wo)man or Everyhuman or Everyperson.

I am now writing this at 4.00 a.m. I went to bed early last night because I have been burning the candle at both ends for too long and I need to re-establish, or should I now say, establish a new regime. I had woken a little earlier, around 3.20 a.m. or so with the remnants of a dream in my head but fast evaporating as dreams do.

I was standing on a “tulach”, or small hill in the middle of a vast plain. Eager crowds were heading westwards towards the setting Sun. Their eyes were set on the horizon of the descending Sun. As the Sun slipped downwards the pace of the crowd was increasing. They were being egged-on by eager politicians and civil servants and religious leaders and professionals of all descriptions and every one was caught up in the excitement and the happinesss. Even the Dispossessed, the Homeless Families, the Street-sleepers, the Unemployed and the Unemployable, the Rejected, the Dejected, and the Infected, were caught up in the excitement. From my vantage point on the low hill, I could see where the land met the Atlantic Ocean. The crowd was now running. They were all running, cheering and happy as they neared the fulfillment of their plans and their desires. They didn’t appear to see the edge of the cliff but continued on falling happily into the sea. 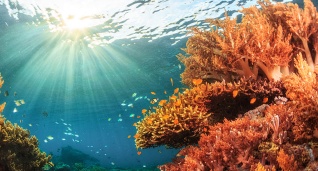 In the watery depths two fish were hiding from a marauding shark under a rocky outcrop in the cliff. The shark gave up on them when suddenly human manna fell from above. The seas frothed and grew red with blood. The fish found an opportunity to slip away. As they reached the open sea again, one turned to the other and there ensued a bubble of conversation.

“Ah sure, didn’t we see that coming for some time now. We better get it right the next time though,” replied his friend, the other fish.

“I’m not so sure,” opined the first fish, “didn’t ye see the way those people had their eyes fixed on the future and lost sight of where they were?”

And the scales fell from my eyes!

i This particular 21-day Meditation Programme is free. You can find more information here: <https://www.facebook.com/ChopraMeditation>

This site uses Akismet to reduce spam. Learn how your comment data is processed.